The Demons Among Us

Every December Amy Dickinson, of Ask Amy fame, encourages parents to leave a gift-wrapped book at the foot of their children’s beds to bring families together to read, but also to instill the joy of reading in children. She receives book suggestions from bookstores across the country.

This year, I’d like to suggest a new book you may not have heard about. It’s called The Demons Among Us written by Jill K. Willis. Her debut novel is written for the Young Adult, Christian reader. So, how does a nice Jewish gal know about this book? Well, Jill happens to be my BFF and I played a small part in her journey to get the book published. If you want to know my part, buy the book and read the acknowledgments.

The book came about when Jill was looking for a “clean read” for her own kids. After a disappointing visit to a bookstore, she decided to realize her own dream and write a book she would approve for her kids.

The two main characters, siblings Joy and Daniel, face their own pressures and demons. Joy is on track to be valedictorian in a year while Daniel is focused on sports. Throughout the book they both must deal with peer pressure, their own demons and understand the difference between right and wrong. Many modern-day issues are raised, making the book timely on a myriad of levels.

The Demons Among Us is available on Amazon and through Barnes & Noble. Autographed copies may be requested through the author’s website at jillkwillis.com.

Watch the video trailer for The Demons Among Us here. 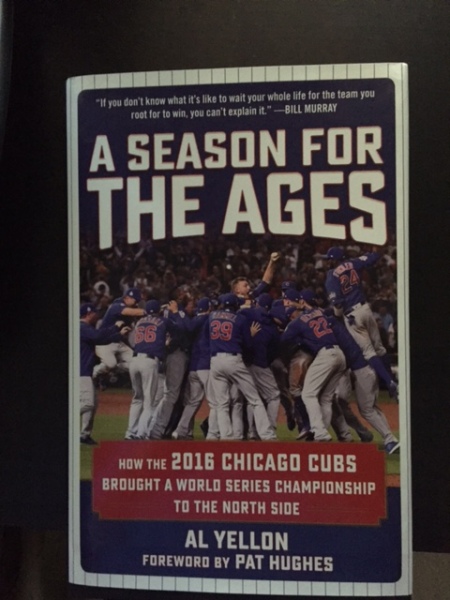 Almost as soon as the Chicago Cubs won the 2016 World Series, the market was flush with books and magazines about the historic Series. One of those books, (which I highly recommend) “A Season for The Ages,” was written by Al Yellon, managing editor of bleedcubbieblue.com.

I will stop here for a second to make full disclosure. I am mentioned more than a few times in this book. That said, what follows is an unbiased review of the book. Really.

Even though I was there every game this season, I had trouble putting the book down. Each page reminded me of each game during this historic season, letting me live again the highs, and some lows, and loving every minute of it.

Yellon does a masterful job weaving data and statistics into his personal journey this past season. And as the season goes on in the book, he can weave in the many “since” moments, as he called them, such as when the Cubs finished August 22-6, making it the first time any Cubs team had finished 22 games in any calendar month since September 1945.

He reminds us that even when the Cubs were at their worst, they were still the best team in baseball, staying in first place for all but one day all season. //

But living all those regular season games paled in comparison to October and postseason baseball. You can feel Yellon’s emotions as he relates his feelings, along with what was happening in each game. I was there, I felt them then and those feeling re-emerged as I read the book.

Did you remember that this was Catcher David Ross’ farewell year? Yellon reminds us that Ross, nicknamed “Grandpa” by Anthony Rizzo and Kris Bryant, had his best season in a decade at the plate and behind the plate.

Did you remember Willson Contreras’ first at-bat? It was a first pitch home run, making Contreras the first to do that in his first at bat at Wrigley since Carmello Martinez in 1983.

One hundred eight years is a long time to go without winning a World Series. Many die-hard Cubs fans lived and died without seeing their beloved Cubs win the World Series, as well as favorite Cub players like Ernie Banks and Ron Santo.  Yellon pays homage to those players and those fans.

This book is a must for every Cubs fan. Years from now you can pick it up, read it, feel the emotions you had as you watched the season unfold and remember where you were on November 2, 2016 when the Cubs finally won it all.

You can find the book at Chicago area bookstores including Barnes and Noble. You can also order it on amazon.com in hard cover or Kindle format.